In the wake of the Boston Marathon bombing, fear-mongers are falling over themselves in an attempt to out-do each other with the most "patriotic" response. That is to say, they've been competing for who can suggest suspending the most/greatest rights in their haste to bring perpetrators to "justice" (vengeance).

To these people, no right is too dear, no consequence is too great, to stop invasive surveillance, religious/ethnic persecution, or imposition of martial law. Don't take my word for it, read what they said for yourself.

First off, we have Stewart Baker trying to blame the ACLU and EFF's opposition to unconstitutional surveillance as some how allowing the Boston bombing. Then we have Rep. Pete King saying "the threat is coming from the Muslim community". He goes on to urge police forces not to be "politically correct" in singling out ethnic groups for surveillance.

Then we have this - stunning - series of tweets from Sen. Lindsey Graham, suggesting that rights be suspended for anyone he suspects of possibly being connected with foreign extremists.

[Edit 2013-04-20] Not to be out-done, NY Senator Greg Bell has suggested torturing Dzhokhar Tsarnaev. Is there truly no law these monsters are unwilling to break in their quest to demonstrate how "American" they are? [Edit 2013-04-22] Instead of walking-back this statement, NY Sen. Bell has doubled-down on his support of illegal acts. 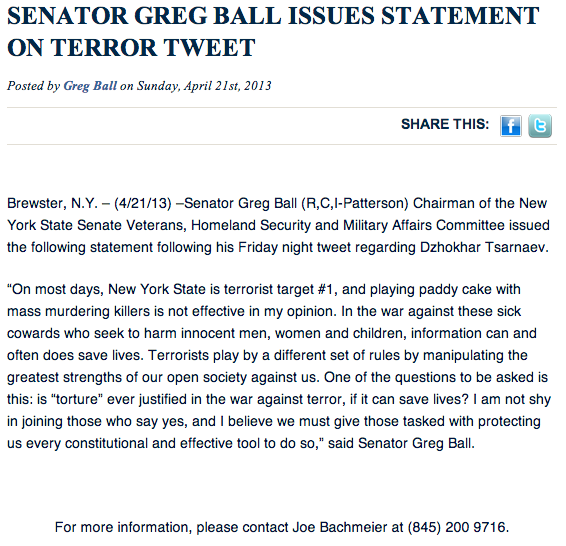 I'm sure to most of my readers the problems here will be glaringly obvious, but in case you happen to agree with the sentiment expressed by these public figures, here's why it's the farthest possible thing from true patriotism.

First, even in a total police state, crimes (by the regime's definition) still happen. Some criminals will go unpunished for their deeds. It is literally not possible to prevent or punish every illegal act ever committed, so setting that as the standard to strive for is wrong from the start. Second, any increase in controls (more surveillance, less due process, harsher penalties, etc) most be weighed against the corresponding loss of freedom. Proponents of totalitarianism love to say "you have nothing to fear if you're not doing anything wrong." In that case, why bother to define rights at all? Just let the executive branch surveil and arrest whomever they want. That's what the argument comes down to after all: Absolute trust in the executive branch to always do what's best for the people.

The fallacy is that very often the executive branch doesn't get things right. They cut corners in haste to achieve a desired outcome, and by doing so they make mistakes of identifying the wrong people, cause collateral damage, and undermine the moral justification for their actions by becoming like the bad actors they seek to punish. That's why we have three branches of government and extensive checks and balances in place to begin with.

The blunt truth is that acts of terrorism against the United States don't cause much outright damage. I know that's a painful thing to hear, especially for people who lost family or friends in New York or Boston, but think about it: Only 3,000 deaths in 12 years and over a decade between major attacks. In terms of loss of life, that's far less than say, gun deaths per year, infant deaths per year, or teen suicides per year. The latter three could all drop substantially with even a fraction of the trillions of government dollars being spent trying to prevent the former. Terrorism is not an existentially threat; We aren't losing nearly enough people, infrastructure, productivity, or societal cohesiveness at the hands of terrorist to jeopardize our civilization.

The one thing that does have the potential to ruin our way of life forever is excessive erosion of basic rights at the hands of cowardly politicians and policy-makers, like the three I quoted above. If these men get their way, US citizens will permanently lose some of the most important rights we hold dear--rights that define the difference between the USA and the oppressive, authoritarian societies the extremists wish to impose on the world. If we react to every attack by giving up more liberty in favor of more religious intolerance and fewer personal freedoms, we accomplish the terrorist's aims in a way more complete than they could ever dream to do themselves.

Our freedom from constant surveillance and unaccountable leaders is what makes us different and allows our culture to thrive. Don't let some cowardly, fearful old men take away your future. Refused to be terrorized. Carry on your life every day, knowing someone might kill you and get away with it, but at least the government can't tell you what you can say and who you can pray to. That is REAL patriotism.